Peggy Adamson once quoted Bert Dow as saying,”Dobermans got along just fine until women started breeding them.” What Bert meant was that women would go to extraordinary lengths to save weak puppies and interfere with natural selection. They spoiled their puppies and made them hard to show. Poor Bert, how he must have cringed when female breeders almost literally took over the breed in the war years and the 1950’s. By 1960, fully 80 percent of the recognized kennel names in America belonged to women. Today, dog shows are a female dominated sport.

However, there is one aspect of the big kennels of the thirties that is sorely lacking today, and that is bloodlines, and their power to produce a consistent type. The large kennels of the twenties and thirties, owned by socialites, and managed by kennel men (and women) were founded on bloodlines. Each had their supporters and detractors, but each contributed greatly to modernizing the dog. Most of these kennels failed during the depression, when high maintenance kennels were no longer affordable.

When the large kennels failed, small hobby kennels took over the dogs, breeding a few each, and the large families of dogs were dispersed over the country, making proper line-breeding impractical. Many new breeders began to select future puppies, a task performed by one or two people in the large kennels. A quick look through a fifties magazine will show that type was suddenly all over the place as a result. From 1950 to 1990, this trend continued, and we begin to see regionalization of type rather than a specific kennel-type.

The foundations laid by the big kennels continued to produce champions for these breeders, but few of them were able to produce any consistent type. “Flyers” occurred with the unpredictability of lightning bolts, one for this kennel and one for that, and rarely made a permanent contribution. In fact, the flyers rarely ever produced anything of value. In our time, we have completely given up bloodlines, and rely instead on the theory that winners produce winners.

Take a moment to look deeply at the next Doberman magazine you receive. You will see that pedigrees are a shotgun affair, each generation bred to the stud of the week. Four littermates may finish, but they don’t have any consistency. Breeders seem to take pride in finishing dogs, but have no strong opinions as to which ones should finish, and which ones truly represent their idea of what the standard means to them. 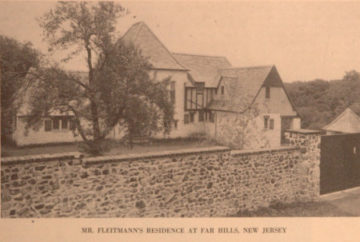 Actually, it is in their favor because from any given litter, they have a type for almost any judge. It is horrifying to think that we are breeding for judges, not for the standard. With a real breeder, we may not completely agree with the type they come up with, but their effort deserves our respect. With shotgun breeding, type will automatically follow fad. It is impossible to adhere to the standard if the breed is following trends, and it will prove impossible to regain the standard once we have followed the trend too far, especially if we let the essential bloodlines go.

Look again at your magazine. The current crop of dogs appear to be Doberman cartoons, so front heavy that they would drop on their noses if the handler ever let go of the leash. The only thing that keeps their rears on the ground is their added length. This is called unbalanced. It is not what the standard calls for, and it is a trend. Whether or not it wins really doesn’t matter to the big picture, because the type won’t ride out the next trend, and these dogs won’t go forward genetically. We are charged with the responsibility to “PRESERVE AND PROTECT THE BREED”, we need to take that responsibility very seriously. Our own glory shouldn’t factor in to our breeding decisions, and instant gratification should not be a driving force in something as complicated as genetics.

Building a bloodline is a thirty-year process, and at the end of that process not all your dogs will be successes. However, you will have attained the respect of the fancy, something much more difficult than finishing a dog and you will have caused no irreparable harm to the breed, for which your survivors will be grateful.

Scroll back to top